A lot of things have happened throughout history. Many things have been recorded for the benefit of the people living in the modern world. One of the most amazing things that happened throughout the course of time was the so called industrial revolution. This article is all about industrial revolution, and how its impact has changed the world for the better. 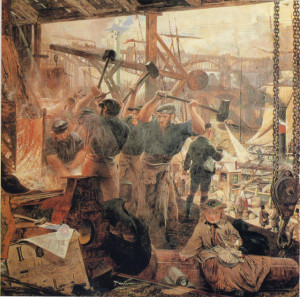 Throughout time, people have dramatically changed the processes involved in manufacturing. Rather than just producing handmade items, facilities and company owners have created methods to include the help of a machine in the production process. This change, which is called industrial revolution, started way back in the 18th century, in England. Eventually, it has spread out to nearby countries such as Germany and France. In the later part of the 18th century, it eventually crossed the sea, to as far as the United States.

The result of this revolution had a wide reach. For instance, companies and industries, such as mining, textile manufacturing, agriculture and glass making, had all undergone different changes. Before the industrial revolution, for example, the textile industry depended on hand spinning in order to produce wool. However, with the invention of spinning wheel, as well as the loom, wool was eventually replaced by cotton in the textile field. In a way, it has significantly lessened production time, as well as the cost of production. Other industries also experience similar advances during this era.

The industrial revolution living standards was also different back then. Rather than employing artisans in order to produce handmade items, machines are now being put to use in order to eventually replace the work of the artisans. As mentioned, spinning wheel helped in the textile industry, water wheel and steam engine in the power machinery. It has resulted to sustained growth, speeding up the overall production. 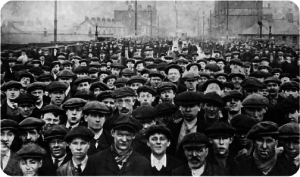 Workers sitting at the entrance of a United States factory

With the materials now produced cheaper and quicker, the socio-economic conditions during the industrial revolution have significantly changed. The need for the manufactured goods have become greater compared to the supply. Because of this shortage in materials, factories are forced to operate for more production hours, placing harder demands on the employees in the workplace.

This change has then resulted to difficulties in achieving work satisfaction, and has eventually led to the creation of laws that protect the workers. As a matter of fact, the Factory Act was passed in 1833 in order to place restrictions on the working hours of employees, especially children. At the same time, it has also set specific standards for factories to attain. Overall, these changes are for the good and have opened up to better ways in achieving success in different businesses.

Industrial Revolution in the United States

The vivid transition from an economy that is heavily agricultural to one that is industrial took over a century in the United States. While Britain has already succeeded in the transition period, American colonies were delayed partly because of the scarcity of labor, and the abundance of land. It has significantly reduced the interest in engaging in expensive investments in production of machines. With the transition from handmade products to machine made outputs, a new era has began, introducing an increased productivity that has created a higher standard of living compared to the way people lived in the pre-industrial world.

Enjoyed this article? Consider reading also about The Cuban Revolution and The Chinese Civil War