The Battle of Shiroyama in 1877 is one of the most disastrous ones from the whole history.

The fall of the Noble warriors

The 19th century Japan suffered difficult economy changes and was influenced by the instability of silver and gold exchanges, that was a little bit different from other countries. Regarding this movement, a few political conflicts between the ruling Shogunate and the imperial military facilitated the destabilization of the country. The conflict brought in the rebuild of the emperor to the last seat of political power. After being established a young prince — Emperor Meiji on the throne and introducing a new set of laws in 1852, the well-known military nobility-the Samurai — were rejected and their authority was lost. Despite this, the most of the samurai, leaded by Saigō Takamori, took up residence in the province of Satsuma, after they left their posts in government and opened own military academies. Later, they became an independent community, trying to bring back their authority. Being increased up to 40.000, Saigo’s army, equipped with swords and single-load muskets pitted against the imperial army, that had a way more powerful equipment, such as cannons, muskets and warships. Saigō’s army had a defeat in several battles by the end of summer, 1877. His army was reduced to almost 3.000 men. One of the most relevant defeats was at Siege of Kumamoto Castle, Kyūshū Island. With 500 people remaining, Saigo’s army ran back to the hill of mount Shiroyama, preparing for the decisive battle. 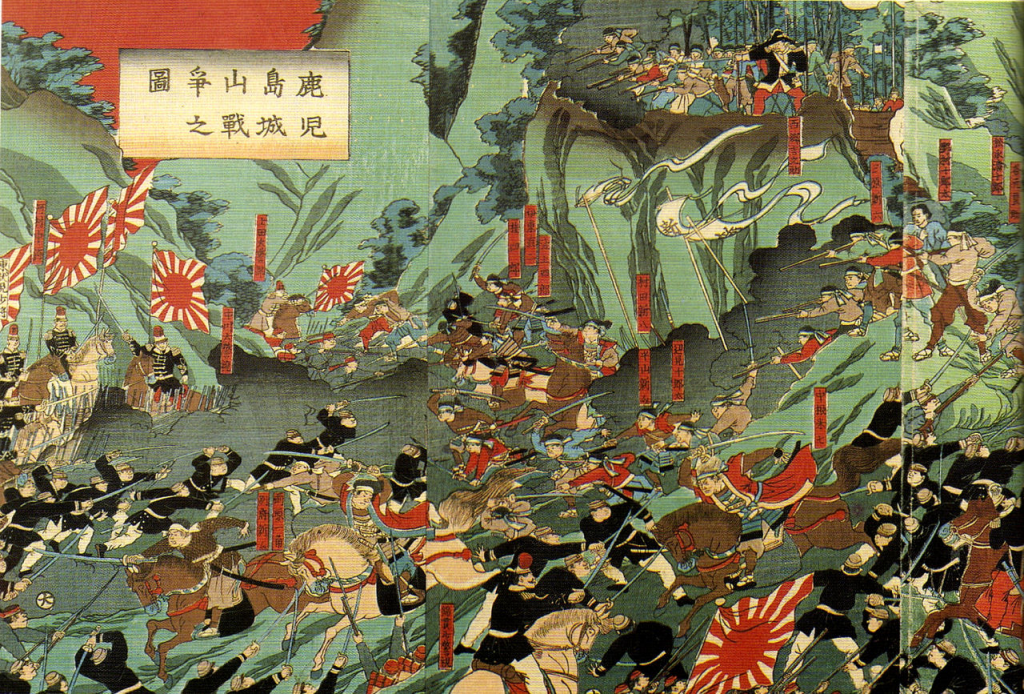 General Yamagata Aritomo, in front of the 30.000 Imperial Army, and Admiral Kawamura Sumiyoshi in front of the marines with five military vessels offshore surrounded the rebels established at the hills mount of Shiroyama. The plan was to attack Saigō’s position from all sides at once. Attacked by enemy firepower from heavy artillery that shot over 7.000 shells, Saigō’s Army had about 500 remaining samurai, able to fight. The Imperial forces surrounded the hill. They built walls and dug trenches, to prevent the samurai escape.

Surrounded and outnumbered, Saigō’s Army suffered and was attacked almost daily by artillery and guns. Small groups of Imperial Forces were testing the rebel defenses. The rebels slowly ran out the bullets for their muskets. Despite this, they started to melt bronze statues nearby, in order to cast more bullets.

Somehow, between the 1st of September and the 23rd of September 1877, General Yamagata sent a letter to Saigō, asking to surrender without bloodshed. Following the code of honor and Bushido, he refused the offer, considering that is more prestigious to die in the battle instead of being taken alive in the hands of the foe.

On the early morning of September 24th, at 3.00 AM, Imperial Forces, from all the directions attacked the samurai outpost. Samurai fought against enemy power and charged the army of Imperial warriors, which were not trained to fight in close sword-fight. For a short time, Saigo’s lines held. Despite a long firefight, Saigo’s army suffered huge losses. Only 40 men remained alive by 6.00 AM, being outnumbered 60-1.

None alive, none survive

By the morning, Saigō was dying from gunshots in his leg and stomach. Shortly, he committed Seppuku, to satisfy the Bushido code of honor. The end arrived when the Imperial forces put into action their 10-barrel, .50 caliber Gatling guns — heavy semi-automatic machine guns they had from Americans. All the 40 samurai were dead in a while.

This is the end of Satsuma Rebellion.

This is the end of Samurai.